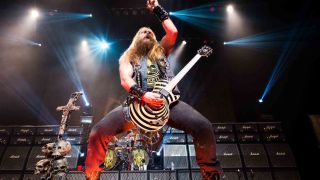 In the latest instalment of our regular touring feature, the Black Label Society berserker talks his new guitar company, his wild days with Ozzy and the downside to hotel destruction…

What's been your finest hour on stage?

"Well, as far as the most memorable, it would have to be the first arena tour I ever did with The Boss [Ozzy Osbourne]. That was pretty surreal, being that I was in the audience at an Ozzy concert not too long before, and now I'm playing with my hero. I'll always remember that.

"But to me, it's all good. Y'know, people always ask me if I enjoy playing in a stadium for 120,000 people more than in a small place in front of 300 people. I think, if you ask any musician, they'll tell you: 'Just as long as somebody shows up, it's good…'"

"I like Black Sabbath's Live At Last, because it's so raw. And I know that Jimmy Page and the guys aren't too keen on The Song Remains The Same, but I really like that one. Band Of Gypsys, that's great; when Jimi Hendrix was making the records, everything had its place, but on stage it was the three of them and it was more of a jam thing.

"Anything live by Cream, too, is phenomenal. Just the way they could stretch things out, especially when you get three monsters like Ginger Baker, Jack Bruce and Eric Clapton throwing down."

Can you describe your current stage rig?

"I'm playing my Wylde Audio guitars and amps. They sound stupendously stupendous, and it makes me feel good inside. Right now, I'm in the process of making my Wylde Audio acoustics, so once those are ready, I'll be retiring my Epiphones and Gibsons. I'm using my signature Dunlop pedals, but I'm making my own stuff as well.

"For me, my live sound is a combination of the amp head, my 300-watt signature Black Label EVM speakers, my pedals, then the guitars and EMG pickups. Those are the ingredients for the soup. I just like stompboxes and going straight into an actual amp head. That's as pure as you can get. I want to hear the tubes of the amp and the wood of the guitar."

Do you have any advice for getting a good live sound?

"To me, it's always less is more. It's the art of simplicity. It's like, there's only two types of human being: either you're a douchebag or you're a good dude. That's it. It's the same thing with amps. It either sounds like a piece of shit or it sounds great.

"You plug it in and you turn it on. You turn up all the knobs. And then, whatever's sticking out that you don't like, you just turn it down. If you need to read a manual, or you need a degree, or to have studied at NASA to operate an amplifier, then we got problems, y'know? Just get a good amp. Buy a Wylde Audio amp - you'll be fine."

"Probably a keg party at about 15 years old. Those early gigs were hysterical. We actually played in somebody's kitchen one time. Those are the memorable ones, when you're a teenager. Back then, it seemed like a much bigger deal."

What's the best venue you've played in and why?

"The Budokan [Tokyo, Japan], just because of the history. It's like when you're playing Madison Square Garden, or Wembley Arena, or the Whisky in LA. Because everybody has been there. Y'know, The Doors, Led Zeppelin, Jimi Hendrix. That's always mindblowing. It's like, 'All my heroes have stood on this stage, and now I'm standing on it - and I've completely ruined it.'

"We just played in Poland. There were 600,000 people there, just a mind-boggling amount of people. I was looking out there going, 'Led Zeppelin slept with almost this many women.' But then, when you're playing sweatboxes and shitholes, there's a certain charm to that as well."

"One that can get you from Point A to Point B. That's a prerequisite. I like We Don't Crash Airlines. They're really good. And I like Still Be Alive When We Land Airlines [laughs]."

"Every day. There will always be Tap moments. I once threw a TV out of a hotel window with Ozzy. They came up with some bullshit excuse that they couldn't fix the room, and they couldn't rent it out, so they charged me 10 grand and they charged 41 grand to Oz. But the look on Oz's face, and the fact that we were both pissing and shitting our pants, and laughing our balls off - that was pretty priceless. So I have no regrets, nobody got hurt and it was good times."

"A lot of male enhancement. Y'know, some Man Root. And then, I like to have some Sleepy Time tea… What was on the rider back in my drinking days? Well, we'd just make sure we had enough cocktails. Y'know, enough beverages for the fellas and the rest of the Doom Crew.

"It would be a very sad day, in the early Animal House years of Black Label, if a [rider] didn't have an adult beverage on it, whether it was beer or whatever else we were drinking, between the glue and the steroids."

Zakk Wylde talks Wylde Audio, Adele and Book Of Shadows II: "I've always loved the softer side of things as much as the heavy"

Zakk Wylde: my top 5 not-so-guilty pleasures of all time

Me and my guitar with Zakk Wylde