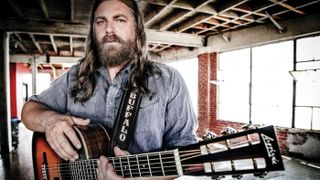 Americana star Jake smith, aka the White Buffalo, keeps it pretty simple on tour, but he's not afraid to get sweaty…

"I had been playing guitar for about six months and joined this shitty band, and we played a place called Club Mayfair, which isn't there any more. It was a punk-rock club and it was super-primitive, but I was nervous as hell getting up there. I think I knew about three chords back then, but, all things considered, it went pretty well!"

"Oh, we keep things pretty minimal - we have almonds, walnuts, fruit, granola bars, sparkling water, green tea… and beer. We don't have anything too lavish piled in there really, but we try to keep it pretty healthy to stay out of McDonald's, you know?"

"Well, again, we keep it very simple, because we play just as a trio all of the time. It's generally drums stage right, I play in the middle and the bassist/keyboard player is on the left. It's a little unusual in that the drummer is up front on the right instead of back middle, but other than that it's pretty straightforward.

"On stage, I play a Taylor dreadnought guitar, which is a really good guitar, and I put it through an electric guitar amp and the house PA. I find it helps, because as a trio, there's no real lead instrument, so that setup cuts through the mix and creates a bit more sparkle."

"We don't give a shit about much of that stuff, man! As a band we're pretty workmanlike and we'll just arrive and plug in and go. But the acoustic guitar is a pretty tough thing to amplify properly, that's why I use the electric amp, it gives it the attack that I like, so that's an important area to get right. But for the most part, we'll lock ourselves in and soundcheck for 10 or 15 minutes and that'll do!"

"I think it's mainly about trying to feel the song, feel the lyrics and play with passion, so you try to connect with people that way. Get in the room and give it all you got and get sweaty! I would say just be on it, you know? But also, a big part of our show is juxtaposing light banter in between dark and emotional songs, so that also helps people connect and gets the audience to feel I'm just a normal person. People don't expect me to be funny; they just think I'm this big brooding guy."

What's the best heckle you've ever had at a show?

"We were playing this show in Canada and I'd heard that the warm-up band had had a guy shouting a load of shit to them while they were playing, and it was a seated show, so it was pin-drop quiet. When we were on, he carried on heckling this nonsense stuff - I wasn't really listening - until some other guy in the audience just stood up and turned around and shouted,'Just shut the fuck up, dude!' at him, which was pretty funny and it meant, in that case, the crowd was on my side."

What's the best venue you've played during your career?

"Well, it's more to do with the audience, you know? The reactions are all welcomed. Sometimes, it's totally quiet without a peep, like in Japan or Poland, where I think there is some traditional respect for performers, so they stay silent, and that's cool, but sometimes it's fuckin' crazy, like in Boston or even London. They're excitable crowds and it's exciting and a totally different kind of show. So, other than the sound and visual guys being on point, I think it really all depends on the audience. But I do like The Crocodile in Seattle and The Observatory in Orange County."

What's the worst journey you've made on tour?

"Well, I do the majority of the driving between shows, so they all seem to merge into one long road after a time, you know? But travelling around the US, you have to deal with the state troopers, and I've been pulled over a few times, for, you know… whatnot… Well, it's all a part of the job, isn't it?"

What's the closest you've come to a 'Spinal Tap' moment on tour?

"Well, we've absolutely all had those I think! I remember one corporate event we did in this huge convention centre, and to get to the stage, we first had to go through this kind of giant maze.

"The promoter had taped these arrows everywhere that were supposed to guide us, but half of the doors were closed and we just ended up walking around stupidly for ages, going back on ourselves and around in circles trying to find our way through this enormous building until we nearly missed the gig. I remember thinking it reminded me exactly of that whole Spinal Tap thing."

"I don't really listen to many live albums at all, I don't much like them, but I do like this one by Waylon Jennings, the country and western singer who was part of that whole Outlaw Country movement. This record is called Waylon Live I think, and it's a great live album; you can practically smell and taste the cocaine and sweat right there on the record, which is a pretty cool achievement for a live album."

Love And The Death Of Damnation is out now on Earache Records.

Jake Smith, aka The White Buffalo, talks songwriting and Sons Of Anarchy