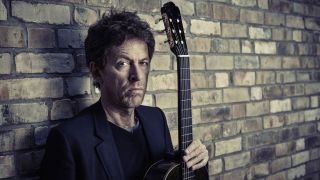 Sting's strings man Dominic Miller talks about the perils of night-driving across continents - along with a highly unusual introduction to Burt Bacharach...

What was your first ever gig?

"I was 15 years old, in Racine, Wisconsin, with a band called The Love Expressions, which was a soul band I joined at school.

"We played in a club and I was the only white person, not only in the band but in the whole fucking building. It was just a covers band, but it was a great experience and I really enjoyed it."

"Two Mesa Lone Stars with 2x12 Mesa cabinets underneath them. I have a Dunlop wah and an Ernie Ball volume pedal, then there's the Line 6 delay - the little one, not the big green one. I also have the classic Boss Delay and the old mono Boss Chorus pedal - instant David Gilmour.

"There's a Boss Flanger, the Boss Tremolo/Pan, an A/DA Flanger and I have the choice between grunge pedals, depending on the stage.

"So I have either the Maxon OD-808 or the Ibanez TS-808 - basically, they're the same pedal - plus a Boss Super Phaser and Boss Compression Sustainer, which helps me control everything."

What piece of gear is most essential to your live sound?

"My 1961 Strat. I've got a replica one - a fake old one - and it's gorgeous and everything, but it doesn't sound anything like it. When you're playing the '61 acoustically, it kind of shimmers in a way the new ones don't.

"It's a bit unreliable with the tuning, but it's got that glassy Strat thing I can't hear anywhere else. I've also got the Les Paul, too, but it depends on my mood: if I'm feeling rocky, then I'm going to go with the 1972 Les Paul Custom, which is like picking up a piano, it's so heavy."

"We were opening for The Grateful Dead in Las Vegas Stadium. We went backstage just before going on and we've got our crisps, the guacamole with the cellophane on the top and there's some geezer in our dressing room just helping himself.

"I'm thinking,'What the fuck?'We've got to go on in five minutes and who's this wanker helping himself to our gear? So I said,'Excuse me, mate. Are you in the music business or something?' and there was silence.

"I saw Sting walking towards me like I'd done something really, really terrible and he came up to me and said,'Dominic, meet Burt Bacharach…'"

What's the best venue you've played in, from a musician's point of view?

"In the UK, I would say The Albert Hall. I get the feeling that everyone's right there with you: people are behind you, next to you, almost on the stage.

"It's not a great sound, but I just love the feeling of playing in a sphere and the history of it and the fact that it's in London, a home gig.

"A lot of my favourite bands played there and just the feeling of being in an old Victorian building - I've had some wonderful nights there."

What's the worst journey you've had, either to or from a gig?

"It wasn't a journey to gig, it was actually a journey to a music video I did with this guy called Vlado Georgiev who is a Serbian pop star. I was doing a gig with Sting in Thessalonica in Greece and Vlado wanted me to come to Belgrade to do his video.

"I said,'I can't do it, mate. I'm doing a gig in Thessalonica and then we're going somewhere else.' But he said,'No, Dominic, you must come!' There were no flights or anything and so I said that it was a no-can-do. To cut a very long story short, he said,'I send driver.'

"He said they'd pick me up after the show and so the band's left, and I'm standing there with my guitar and my carry-on, and it turned out that I had to drive through the night across three different countries with three different drivers to get to Belgrade. That was quite a journey."

"Just be honest: that's the number-one thing. The way I look at it is, it's a bit like going on a dinner date with somebody you don't know that well. There will be awkward moments, but eventually, what you want is to make that connection.

"So you don't want to be too confident, because that doesn't look good to the other side. There's got to be some humility or vulnerability as well - just show them who you really are, and it's cool."

"I'm very lucky, because I watch the best people in the world practise, like Vinnie [Colaiuta]. It's a beautiful thing to witness, because he starts slowly and methodically, and I've learnt from that.

"It's like Tai Chi or musical yoga; I just like to do things slowly and purposefully and purely, and then I can go on stage feeling that I'm in sync with my instrument."

"Made In Japan, Deep Purple, end of. I'm not a big fan of live albums generally, which is why I've never done one, because I think you really have to be there at the gig to experience it.

"But with Made In Japan, you really feel that you're there and it's the best version of Smoke On The Water ever recorded."