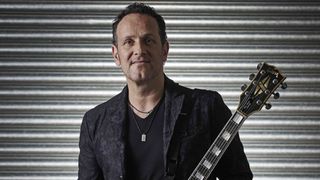 We talk tours with the Def Leppard and Last In Line guitar man, who discusses the perils of playing inside pyramids and other stories…

"My very first gig would have been at Rathmore Grammar School, probably when I was 12 or 13 years old. Any time there was a school function I would form a band and we would play - very, very poorly, I may add.

"I have no doubt that it was beyond terrible and I'm most thankful that YouTube didn't exist in the mid-1970s. We all have to start somewhere, and I'm happy to say that everything has progressed in the right direction since."

"The Def Leppard rider is sumptuous, with organic veggies and expensive wines, and so on. Leppard play in big sold-out arenas around the world and as we have a couple of vegans, two meat-eaters and one in-betweeny (me), we have a very complex and detailed rider.

"We also have a dedicated dressing room/wardrobe person who goes into the venue in the morning and tarts up the rooms before we arrive with drapes, rugs and lamps to make them look less like the locker rooms they really are and more like your living room at home. Such a luxury!

"Last In Line's rider is basically a six-pack, a cheese sandwich, and, if we're lucky, a clean towel."

"My Def Leppard rig is massive and complicated with loads of buttons and flashing lights and I have absolutely no idea how any of it works. It sounds pretty good, however. My Last In Line rig is a Les Paul, a cable, a splitter box, two Engl heads and two speaker cabs. It's so simple that even a guitar player could set it up. As an added bonus, it sounds incredible! Less is very much more."

Best tip for getting a good live sound?

"There are so many variables when it comes to a good live sound. The sound of the room makes a huge difference. When I was in my teens, I got to practise in a big, empty barn with plenty of natural reverb, but when I first started playing gigs around Ireland with Sweet Savage, I was shocked at the difference in ambient sound and I had to adjust my ears and my playing accordingly.

"I suppose that, with experience, you get used to listening to everything around you and you play within that environment and learn to not just be focused on your individual guitar sound. Stage volume is usually more intense than what you would be listening to in rehearsals, as well, and the louder you drive your amps, the harsher they will usually sound. Most amps sound great when they're barely pushing air, but when you wind them up, they take on exceedingly different characteristics. Plan accordingly."

"Again, with Def Leppard we're very coddled - because we can afford to be, I guess - and we get the luxury of individual wardrobe cases that we can fill with clothing and various personal items. But when I tour with Last In Line I really have to reassess and repack accordingly.

"Plenty of good reading material is advised, as the road is mostly down-time. As the saying goes, 'Hurry up and wait.' And believe me, over the decades of being a professional touring musician, I've done a lot more waiting than playing."

"First off, get your priorities straight. Yes, attitude can go a long way in the rockstar game, but, personally, I don't enjoy seeing a young act full of bravado and attitude when they don't have the chops to back it up.

"Conversely, I've also seen acts that have similar attitude who have obviously honed their craft, and that's the winning combination. You'll have a hard time making progress if you put the cart ahead of the horse. Try to keep your level of humility relative to your level of talent."

"Fortunately, there have been very, very many. A real standout from the past, however, was the old Glasgow Apollo. The balcony used to bounce - it was equally frightening and fascinating to watch this while on stage. Alas, they tore it down.

"Generally, the old theatre-style venues are still my favourites to play; they're the perfect balance of sound and atmosphere, and just the right size to remain intimate yet still have a concert vibe, too."

Worst journey to or from a gig?

"Two car rides, one very long flight, two trains and a broken elevator. All to get from Los Angeles to northern Germany in the middle of winter to play one three-minute song on a crappy TV show. Utter shite!

"Of course, looking back to my very early days with Sweet Savage, there were numerous perilous journeys. Come to think of it, it might be safe to say that every Sweet Savage gig presented some sort of unique travel challenge."

"I toured repeatedly in the USA in the 80s - at the height of all things hedonistic. I've seen a lot of weird things go off at rock shows. I could write a book about them all. Perhaps I should!

"The usual answers involve sex and drugs and, very occasionally, rock 'n' roll. The rock 'n' roll moments were always the best, however. After all, that's what it's supposed to be about, right?"

"Oh so many, actually. On the second Dio tour in 1984, Jimmy [Bain], Vinny [Appice] and I started the show inside the top of a pyramid. The top was supposed to come off. It didn't. We were trapped in there for most of the first song - all the while smoke machines were feeding into it, too. You had to laugh… once you stopped coughing, of course."

What do you usually bicker about on the road?

"People skills are an essential part of rock 'n' roll. While it's very important to be proficient on your instrument, it's probably equally important that you can get along with people during the many, many hours of submarine duty that we all have to endure during a tour.

"Of the 24 hours in a day, only two or so are spent on stage. The rest is living/travelling in close quarters with your bandmates. Nobody wants to be on a tour bus with an asshole virtuoso."

"Air New Zealand. Genuinely happy people make life - and air travel - so much better and I've always had great experiences on this airline.

"Most airlines, however, are not instrument-friendly, so if you have a '59 flametop Les Paul, then leave it at home and bring the Epiphone instead. I've had more than one instance whereby the guitar I checked as baggage comes out the other end as splinter-wood."

Which country has the best beer?

"Japan. Just like their cars, it's marvellously well-engineered. Just look at those big silver cans of Sapporo. You know that anyone who puts that much dedication into the packaging is going to go all-out on the beer."

"I'm still striving for that, but it's the law of averages, really: we can't be 100 per cent every night and, indeed, that's what keeps it interesting for our audiences and keeps us performers honest in the process. If every performance was predictable, live music wouldn't be so special to begin with."

Def Leppard and Last In Line's Vivian Campbell: my top 5 tips for guitarists

Def Leppard's Phil Collen: the 11 records that changed my life