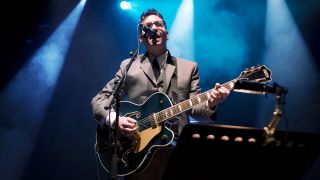 It's all-you-can-eat ear candy as the Sheffield songster Richard Hawley returns for his longest UK tour in years...

Richard Hawley and Sheffield go together like Henderson's Relish and, well, just about any food consumed in Yorkshire. It's with some excitement then that he lines up his biggest hometown show yet, as part of a 13-date UK and Ireland tour.

"Home shows are always good," Hawley tells us. "People want to see you do well. I remember when we used to play the Leadmill and there was always that 'Sheffield Semi-circle', we used to call it.

"All of the musicians in the bar would stand there with their arms crossed going, 'Go on then. Impress me!' [Now we're playing the arena], it would have to be pretty big fucking semi-circle!"

The tour is in support of the songwriter's eighth album, Hollow Meadows, which in typical Hawley-style is filled with more stunning gear than a taser shop.

"One of the most filthy words in the English language for a musician is 'compromise'," says Hawley. "So [the touring gear list] is ridiculous, but it's got to be like that now. There's such a wide range of stuff over eight albums that it covers a shitload of ground… Well, that's my excuse."

Bring out the 'bomber

Case in point, the backline: alongside two Fender Deluxes (in stereo), Hawley runs a Blackstar Artisan, a Fender Supersonic and a Budda combo, which he can drop in and out at will, "For when you need to get the Vulcan bomber out."

The setlist is still to be decided, so depending on the night you might see anything from handmade Fylde acoustics to a Gretsch 6196, a Gibson ES-295, a Rickenbacker 12-string and one of several faithful ES-335s.

"I've got an old 1963 Cherry Red one with a factory-fitted Bigsby," says Hawley. "I call it Old Red, because it's old and it's red - it's not very complicated - and that's a beast."

Guitar fans should also keep their eyes out for another treat: Hawley's neighbour, Martin Simpson. The folk legend guests on the album, and may pop up at a show.

"Martin is a heavy tourer, but I'm hoping that there's going to be a bit of crossover," says the guitarist. "He's become a very good friend and he's fit into the band vibe really easily."

If the shows live up to the playing and sounds on the album, we're in for a treat. "There's a feral thing that people feel if you're into it and they can sense it if you're not," says Hawley. "I just try every night to step up to the mark. As I say to the band before we walk on: 'Right girls, it's tits and teeth time!'"

Richard Hawley's UK tour kicks off on 25 October. For tickets and further info, head to the official Richard Hawley site.