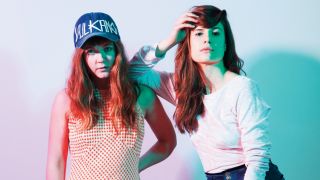 Sweden's riotous psychedelic post-punks Vulkano rose lava-like from a fault line created by the dissolution of Those Dancing Days.

"I wanted this band to be different to traditional pop music," explains frontwoman Cissi Efraimsson. "We wanted to come up with something animalistic - closer to nature and mysticism."

Album Live Wild Die Free certainly hits that nail on the head. It's a brilliantly off the wall combination of spooky synths, woody basslines and some primal, aggressive fuzz guitar, courtesy of ex-band mate and friend, Rebecka Rolfart.

"I used a Fender Mustang, a Hagström Deluxe and a Roland Jazz Chorus amplifier, with a Vox Big Ben overdrive pedal... that was the only gear I had, but it sounded really nice," explains Rebecka. "I like my guitar sounds to be quite simple but convincing - like a well-rounded voice that has been drinking whisky!"

It's fair to say everyone involved with Vulkano has a powerful imagination. For example, Jungle features the immortal lines: "In the jungle I see a mushroom/ I pick it up, it smells funky - and I like funk/ So... I... eat it!"

"I guess we have a kind of animalistic, energetic, fairytale style live," explains Cissi. "I think we have caught some kind of nature spirit. It's quite an intensive experience."