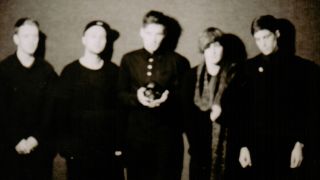 The Vestals: blurry by design

Intelligence: Most bands would sell their granny to be recognised in the street, so it's refreshing that The Vestals, Newport's very own chorus-laden pop saviours in waiting, provided MusicRadar with a picture that looks like a mistake. "You can go on Twitter and some bands are posting what they had for breakfast each morning," says guitarist Gethin. Not the Vestals though, oh no…

Formed in Newport in 2011, The Vestals have so far infiltrated the music press with a mixture of stealth, mystery and a fine line in shimmering guitar pop. "One of the big influences on the band is the Cure, we like Echo And The Bunnymen, but also modern day groups like The Horrors as well," says Gethin. "They have big pop hooks in there, but it's not presented in a standard way. We just want to create big pop songs with guitars - well, not just guitars, whatever suits the music really, but big pop songs."

So far, it's a formula that's proving successful - self-produced debut single Perfect Pain (which can be pre-ordered now from Killing Moon) glistens with slick guitar and yearning vocals, and the band are about to head out on tour with Pure love.

"We're really excited to go out on the Pure Love tour," says Gethin. "We've only played about 10 or 12 shows, we've been offered quite a bit but we've kept it quite minimal. We played the Killing Moon club nights last September, which is run by the label the single is coming out with, and we've played with Swim Deep. We've been doing little bits and bobs, but this is the first major outing. We can't wait for the Valentines day gig at XOYO, but we're just looking forward to playing everywhere to be honest."