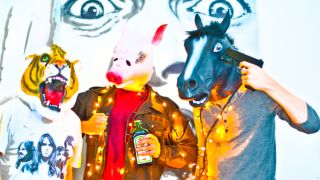 Intelligence: Rushing guitars, swirling psychedelic flourishes, animal masks - Silver Shields have got the lot, and make an almighty noise for a three piece. Not bad for a band that took time and happy accidents to get going.

"The band actually started recording about two years ago, in between bands that Rob and I were already playing in," says singer and guitarist Darrell Carter. "I had a bunch of songs that I'd recorded at home on Cubase - really basic stuff with vocals and acoustic guitar with lots of reverb and the occasional tap of the mic head to act as a kick drum. They were dog rough, but gave me a good idea of how I'd like them to sound with a 'proper' band. So, for eight weeks in between other bands, Rob and I would practice these songs, just guitar and drums, with me splitting the signal and sending one level into my Marshall stack and the other into a Trace Elliott to give it some bottom end. We recorded the drums live and that was the last that Rob heard of the tracks for about a year.

"I would then go into the studio to work on the guitars and vocals. While I was in the studio I met James, who was working as an engineer, and we got talking about bands and stuff. It turned out that James is also a monster keyboard player. As soon as I heard him playing I thought 'I'll have some of that!'. After we'd finished the tracks I brought Rob back in and played him the songs and he was like 'Jesus, I didn't expect them to sound like this!'".

That sound - a sort of swirling psyche-pop bathed in feedback and given a shoegaze shimmer - has so far seen them championed by BBC London and industry bible Music Week, and their self-titled debut EP looks set to cement their position as Hertfordshire's leading guitar-obsessed noiseniks.

"I think all the songs are how I imagined them to sound, the only exception being OverDrozd," says Carter of the recording process. "I wanted a My Bloody Valentine 'Isn't Anything' kind of guitar rush. I recorded six guitar takes on a Fender Mustang at flat-out feedback and used the tremolo arm to bend the sound. During the chorus the guitars are being thrashed to death, with a kazoo thrown in for good measure, too."