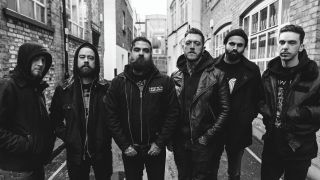 The first mistake we make when talking to (ex-A/Radio One Rock Show man) Daniel P Carter is to assume his new band Krokodil is named solely after Desomorphine - a drug whose street name reflects the gruesome effect it has on users' skin.

"There's a bunch of things that it represents," explains Dan. "Carl Sagan talks about one of the oldest parts in the brain, the R-complex. It's the reptilian brain, the bit in charge of animalistic instincts. He says, 'Inside your brain is something that resembles the brain of a crocodile.' I always loved that idea."

It probably won't come as much of a surprise, then, to learn that Krokodil - completed by members of Sikth and Gallows, including Lags Barnard and tech extraordinaire Alex 'V-Man' Venturella - are good friends with Mastodon. Indeed, following the release of debut album Nachash, Dan is due to load up his Diezel amp and Gibson SG to head out with the 'Don on a European tour.

"This is where people say, 'You've not paid your dues,'" anticipates Dan. "Well, we have - we've all got in the Transit and done 200 dates! This time, Mastodon have been really cool about it. It's the perfect gig."

What we'd give to hear those tour bus discussions...

For fans of: Neurosis, Mastodon