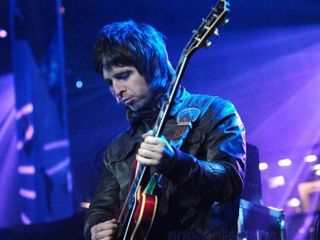 Oasis guitarist and songwriter Noel Gallagher has declared that his guitar playing is "average at fucking best". And his mate Paul Weller even agrees, calling Gallagher's playing "rudimentary".

The two discuss guitar playing in an exclusive joint-interview in the new edition of Total Guitar.

Gallagher says of his playing: "It facilitates what I do in Oasis, know what I mean? I'm unfortunate enough that two of my best mates are Johnny Marr of The Smiths and Paul Weller. Those two are virtuosos to me although neither of them would admit it. On the electric guitar they're it. So if you're asking me how do I compare to those two - and I like to compare myself to the greats - I'm average at fucking best."

"Bless him, but his playing is rudimentary," reckons Weller. "But Noel doesn't pretend to be a guitar god. He's very good at putting chords together and he's got a distinctive style in terms of his chord sequences and his rhythm playing. It's recognisable, I suppose…"

MusicRadar might disagree, to a point. These three Oasis tracks, at least show that Gallagher is a talented player with a brilliant ear for melody.

Live Forever
There's nothing particularly complicated about the playing, but this is a melodic solo in the best sense - you can almost sing it.

Rocking Chair
A rare acoustic solo by Gallagher, surprisingly fleet-fingered and with some effective alternate picking

Slide Away
Though Gallagher admits to channelling the spirit of Neil Young for this Definitely Maybe track, when played live he extends it with some impressive bluesy bends and motifs.

Or are we being kind? Is Gallagher a good guitar player, or just a decent songwriter with limited playing talent?

Get the new edition of Total Guitar (out 28 January in the UK) starring a world exclusive Noel Gallagher and Paul Weller joint interview. Free with every issue, you also get a 36-page Beginner's Guide To Guitar.