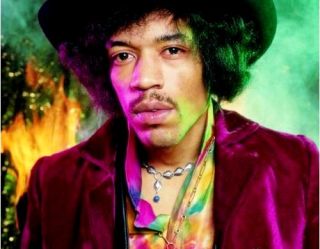 "Businessmen, they drink my vodka...Wait a minute, I have a vodka?"

Hendrix fans who have been getting 'stoned and beautiful' on Hendrix Electric Vodka are out of luck - the spirit is going to be disappearing from shelves.

Experience Hendrix L.L.C. and Authentic Hendrix L.L.C., the companies that own the rights to the Jimi Hendrix brand (including the music) have won a copyright infringement suit against Craig Dieffenbach and Electric Hendrix Spirits, LLC.

Judge Zilly of the United States District Court ruled that Dieffenbach and his associated companies have to pay up big bucks for releasing Hendrix Electric Vodka - $3,200,000, to be exact.

In addition, Dieffenbach and their asociates have to pull all of their Hendrix related products off the shelves immediately and cease all related advertising. So take a good look at this photo - it might be the last of Hendrix Electric Vodka you ever see.

The case has been ongoing since March 2007 when Experience Hendrix and Authentic Hendrix went after Dieffenback, alleging that the company deliberately tried to deceive the public into believing these were genuine Hendrix products.

Besides, everybody knows Jimi Hendrix was more of an herb man. Not that we're giving anybody ideas, mind you.