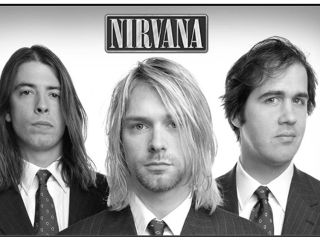 Novoselic made Nirvana's show a knockout

It was the self-inflicted head konk seen round the world - that moment in 1992 when Nirvana's Krist Novoselic threw his bass in the air and beaned himself on the noggin at the MTV Video Music Awards.

Novoselic is coming clean about exactly what happened that night. And surprise, surprise - Axl Rose figures into things.

Writing on his Seattle Weekly blog, Novoselic recalls an afternoon of waiting around and drinking warm beer to kill time. An encounter with Guns N' Roses' vocalist would cast something of a pall over the proceedings.

"I eventually made it to the food service area," he writes, "where Kurt (Cobain) and Courtney (Love) were at a table with their newborn daughter, Frances. They told me that Axl Rose had walked by and Courtney started teasing him. She yelled, 'Axl, Axl - you're the godfather!' Upon hearing this, Axl apparently got very annoyed, walked over to Kurt, and demanded that he keep his woman in line.

"Kurt turned to Courtney and sarcastically asked his woman to keep in line and left it at that. Axl then split. Of course, Kurt and Courtney were musing over Axl's response in the context of society's patriarchal tendencies. My thought was that Rose shouldn't have gotten bent out of shape. He should have walked over and asked to kiss the baby or something!"

"Time for the bass-toss schtick"

Still brewing over the encounter with Rose, when it was time for Nirvana to perform Lithium, Novoselic didn't take the stage in a proper frame of mind. "Nirvana gets introduced," he writes, "I'm plugged into some awful bass rig that's distorting terribly. I can barely hear what I'm playing, and the tone deteriorates into an inaudible mess.

"Fuck it - time for the bass-toss schtick. Up it goes!!!!! I always try to get good air - I bet I hit over 25 feet, easy! But no matter how high it went, I was not on my game - the only time I've ever dropped it was then in front of 300 million people. Ouch! I was fine, but I faked like I was knocked out, perhaps expressing my inner torment over a taxing evening. (Maybe I was just embarrassed.)"

Brian May to the rescue - with bubbly

After being tended to by paramedics, Novoselic was surprised to receive some medicinal treatment of another sort from a rock legend.

"Standing behind (the paramedics) was Brian May, the guitarist of Queen, with a glass of chilled champagne," Krist writes. "I signed the release just to get the medics away from me so I could take a sip of Mr. May's wonderful medicine. Ahh, yes!!! Moments later Dave Grohl burst in. He'd been looking all over for me, only to find me enjoying a calm glass of bubbly with Mr. May."

You can relive Krist Novoselic's ultimate rock star moment on this video clip. And click here to read his entire blog on Seattle Weekly.com.