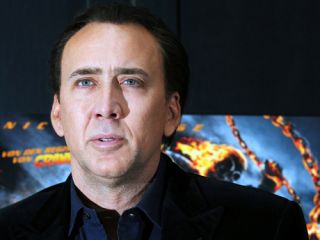 Do we call him Nic Cage IV or simply use symbols? © Jens Kalaene/dpa/Corbis

Who wouldn't want to be compared to Led Zeppelin? Well, Nicolas Cage sure doesn't mind, and while promoting his latest film, Ghost Rider: Spirit Of Vengeance, the Oscar-winning actor found a way to note similarities between himself and the iconic rock band.

"I would like to find a way to embrace what Led Zeppelin did, in filmmaking," Cage told the Huffington Post. "Right now, what I'm excited about is trying to create a [pauses] kind of a cultural understanding through my muse that is part of the zeitgeist that isn't motivated by vanity or magazine covers or awards. It's more, not countercultural, but counter-critical.

"[Led Zeppelin] were the biggest band in the world and they remained intimately mysterious - because they just went about it their own way, or against what the advice might have been or what the council might have been.

"And I admire that. And I would like to tap into more exploration of horror films and just everything that I shouldn't be doing, according to representation."