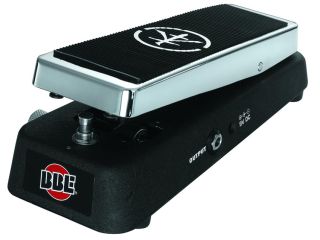 So good it even has a halo

There are plenty of wah-wah pedals on the market. So what makes the new Wah pedal from BBE Sound different from all the rest? Turns out it's something new that thinks it's something old.

BBE Sound is based its new Wah pedal on a 1967 Class A circuit design featuring a "halo" inductor, which in this case has been re-engineered and tuned to recreate those sounds made famous by players such as Eric Clapton and Jimi Hendrix. The "halo" is essential to its unique vocal-like qualities - the same characteristics sought after by players and collectors willing to pay premium prices for vintage wah pedals.

In addition, a custom-designed potentiometer provides a natural sweeping response while BBE has also added a "harmony" control allowing players to tailor the wah sound to their individual tastes. Apart from an on/off LED indicator, as with all BBE pedals, the Wah incorporates true hardwire bypass for a clean signal path when the effect is bypassed.

BBE offers a five-year guarantee on the Wah, which measn that in 2013 you can still be partying like it's 1967. More more information, visit the official BBE Sound website.