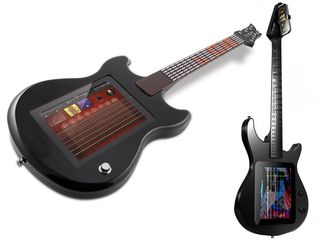 ION's Guitar Apprentice (left) and Behringer's iAxe Guitar are both on the way.

Following the announcement last year of Starr Labs' iTar, ION and Behringer are set to release guitar-shaped MIDI controllers for the iPad.

ION's version is known as the Guitar Apprentice. Your tablet slots into the controller's body, while the neck features light-up buttons that, in conjunction with the Guitar Apprentice app, can help teach you to play the guitar. We're also told that the device is compatible with GarageBand and other Core MIDI apps.

Behringer's iAxe Guitar looks similar in terms of design - though we're not quite sure how the fretboard works on this one - and is also billed as a learning instrument.

"With the iAxe Guitar, I wanted to make a product that introduces everyone to the lifelong pleasure of making music by not only providing instant musical gratification but to also guide and grow the musician's talent toward becoming a sophisticated guitar player, " says company founder and CEO Uli Behringer.

"The iAxe Guitar uses the power of a tablet computer and the creativity of our partner developers to become a truly open platform for musical expression".

No news yet on the price or release date for either product.