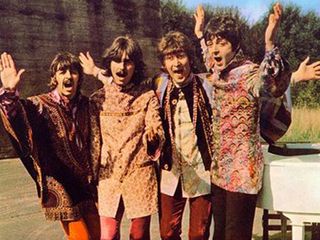 The Beatles "roll up" in new footage

The Beatles are arguably the most-documented four individuals to have ever walked the earth. But new are footage of the Fab Four - shot on grainy, color, 8mm film - has just been uncovered.

The film, shot during The Beatles's 1967 visit to Plymouth, during the making of the TV movie Magical Mystery Tour, finds John, Paul, George and Ringo aboard their infamous yellow tour bus and walking the British coastline.

It is believed the footage was captured by some very lucky vacationers. It will surface as part of a new documentary on the legendary Liverpudlians, which will reportedly be called Mystery Tour Memories.

"They were quite happy to relax and talk to people; the days of 'Beatlemania' were long gone," David Lambert, a film producer for Arthouse Pictures, tells Uncut. "I think it was George who said 'As long as people don't want to scream at us and pull our hair out and take our clothes off, we are quite happy to sit and talk to them."

Check out a trailer for the film here.