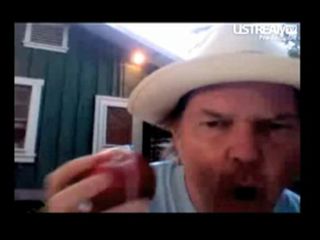 Fork In The Road already has three winners

Earlier this year, we got a not-so-subtle taste of Neil Young's upcoming album Fork In The Road. The video of the title track had Young singing while waving around an apple with earphones stuck in it.

Young has now released not one but two additional videos from the new record, and they're a study in contrasts both visually and musically.

Cough Up The Bucks

The first, called Cough Up The Bucks, is a comical look at a corporate raider in the last throes. Young, dressed in power suit and riding in the back of a ridiculously long stretch limo, reads the Wall Street Journal while singing/talking into his Blackberry and checking stock reports on his laptop.

Check out the video on Neil Young's MySpace page here. (It's not on YouTube yet,)

On a different note entirely, the acoustic ballad Light A Candle is as beautiful and elegiac as anything Neil Young has ever done before. The video features Young's wife, Pegi, holding a candle in the window of the RV behind him as he sings, "Instead of cursing the darkness/ light a candle for where we're going/ there's something ahead worth looking for."

You can see this video at Young's MySpace page here.

If these songs are indications of the depth and range of Fork In The Road (due 7 April), we can't wait to hear the fiished set.