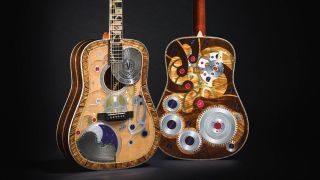 NAMM 2017: Martin has made its fair share of showstoppers before, but nothing can prepare you for its jaw-dropping 2 Millionth Guitar and limited-edition D-200 Deluxe, both of which were made in conjunction with American watchmaker RGM.

According to the quite beautiful video below, there are plenty of parallels to be drawn between guitar players and watch-wearers, and accordingly, Martin has gone all-in with the time/watch theme for these two guitars.

The guitar itself packs a D-45-style body with a highly figured bearclaw Engelmann spruce top and Brazilian rosewood back and sides.

This one will be on show at NAMM, we'll make sure to watch out for it (sorry).

Much of the decorative action takes place around the back of the guitar, where the pre-CITES Brazilian rosewood is inlaid with watch gears cuts from reconstituted stone, mother-of-pearl, bloodwood, Haiwaiian koa and ebony.

Inlays on the guitar's highly figured bearclaw Engelmann spruce include a minute track in mother-of-pearl, birdseye maple, flamed Hawaiian koa and ebony, plus a pickguard with pearl-inlaid watch gears and aluminium rosette with guilloché engraving.

On top of that, there's triple-strand abalone pearl striping bisecting the length of each side, plus a maple-bound ebony fingerboard with gear mechanisms.

Each guitar comes with a newly designed RGM watch that references details from the guitar and bears a matching serial number.

What's more, each guitar is shipped in an aluminium Zero Manufacturing attache case with built-in hygrometer, which allows owners to monitor the atmosphere of the case without opening it.

Head over to the company's website for more info.