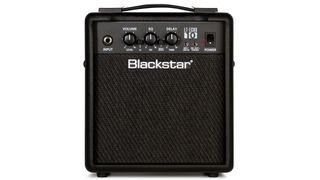 Echo 10 produces 10W from two 3" speakers, while Echo 15 delivers 15W from the same configuration, but adds gain and tone controls.

Both amps also feature mp3 inputs and emulated/headphone outputs for practice use.

Expanding on the incredibly well-received Fly 3 mini amp, the Fly 3 Bluetooth adds - you guessed it - Bluetooth connectivity to the format, emphasising its ability to function as a music speaker.

Elsewhere, the amp retains the same two channels, ISF tone-shaping, 'tape' delay effect, plus emulated line out and mp3 in.

A 3" speaker produces the tones, while the amp can be powered by battery or power supply (available separately) - there's also the option to add the Fly 103 extension cabinet for a 6W stereo setup.

The Fly 3 Bluetooth is available from late February/early March for £79.99. Head over to Blackstar Amps for more info.