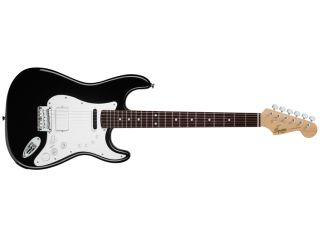 NAMM 2011 PRESS RELEASE: Fender, the name synonymous with rock 'n' roll, announces today the world's first electric guitar that is also an officially licensed Rock Band™ 3 video game controller. Blending state-of-the-art gaming and guitar technology with the authenticity of Fender design and engineering, the Squier by Fender Stratocaster Guitar and Controller is created for musicians and gamers alike and rocks both worlds - whether plugged into a guitar amp or into a video game console.

Designed exclusively for the Rock Band™ 3 Pro mode, the Squier by Fender Stratocaster Guitar and Controller allows players to play the actual notes and chords of their favourite songs while racking up high gameplay scores. Its position-sensing fingerboard responds to the touch, turning gameplay into real musical performances. Gameplay requires the use of the Mad Catz® MIDI Pro adapter (sold separately), compatible with the Nintendo® Wii™, Microsoft® Xbox 360®, and the Sony PlayStation® 3.

Additionally, Rock Band™ 3 features two training modes. The "Instrument Trainer" mode helps to acquaint players with the guitar and the way it works within the game. Within a few lessons, players can go from plucking single notes to fretting chords and moving lines. The "Song Trainer" mode allows players to break down any song on the tracklist and master it, one phrase at a time. Both modes feature a full backing band, and offer the ability to slow tracks down, so players can learn at their own pace.

"This represents the first true bridge between gamers and guitarists," said Justin Norvell, product director, Fender Electric Guitars. "Now, instead of taking a huge leap from five buttons to a full guitar, gamers can seamlessly transition from the Rock Band 3 environment to the real thing—plugging into their favourite amp."