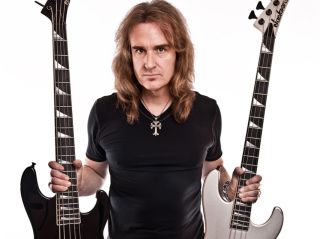 NAMM 2011 PRESS RELEASE: Jackson guitars is proud to announce its newfound partnership with legendary bassist and Megadeth founding member, David Ellefson. As part of the partnership, Ellefson will collaborate with the Jackson Research and Development team to design future Jackson bass models, based on the knowledge that only decades' worth of sold-out world tours and groundbreaking albums can create.

Additionally, Jackson is paying tribute to an instrument closely tied to David and Jackson bass guitars - the USA Custom Shop David Ellefson Signature Model Jackson Concert Bass. The instrument is based on the Jackson Concert Bass Ellefson used during the recording of Megadeth's landmark 1990 album Rust in Peace, and is a replica of what he used more recently on Megadeth's 20th Anniversary Rust in Peace World Tour, Megadeth Rust in Peace Live DVD/CD and Metallica/Slayer/Megadeth/Anthrax: The Big 4 - Live from Sofia, Bulgaria DVD.

"When Megadeth set out to replicate the Rust in Peace tour, there was only one clear choice of bass guitar: my original Jackson Concert Bass," said Ellefson. "The instrument is based on the Jackson I played on the album, and is exactly like the one I'm playing today… This bass truly takes no prisoners!"