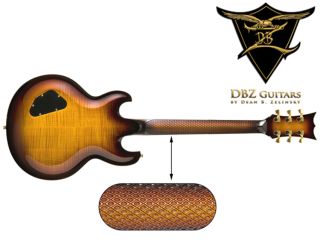 The Z-Glide guitar necks, which will be available as an option on DBZ USA Custom Shop Guitars, utilize a surface designed to let your hand glide effortlessly up and down the neck. Dean Zelinsky's Z-Glide necks eliminate the sticky/clammy feeling gloss lacquered necks are known to produce.

Invented by company founder Dean Zelinsky, the revolutionary Z-Glide guitar neck is achieved by precisely engraving carefully tested patterns into the back of the neck which reduce surface area while trapping moisture and sweat. The result is an ultra fast neck with a consistent, silky-smooth feel.

"This is likely the first real breakthrough in guitar design in many years", explained Dean B. Zelinsky, CEO of DBZ Guitars. "No other company has aggressively addressed the surface feel of guitar necks.For other companies, satin or un-finished necks is the 'solution' and has been for years… vbut neither satin or un-finished comes close to what the Z-Glide achieves in feel and playability."

"I believe the protection the finish provides is important which was part of the inspiration of developing the Z-Glide neck…the magic happens underneath the finish," concluded Zelinsky.

The Z-Glide neck will only be available as an option on USA made DBZ models for 2011. MSRP for the Z-Glide reduced friction neck option is $300.