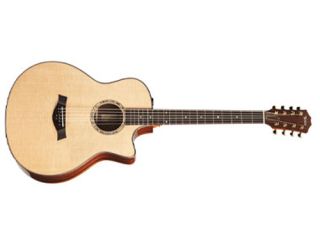 PRESS RELEASE: Born from a love of tone and a passion for innovation, Taylor Guitars has expanded the possibilities of guitar voicing in its new model, the Baritone 8-String.

Featuring a Grand Symphony body with a richly hued back and sides of Indian rosewood topped with Sitka spruce, the Baritone 8-String embodies the spirit of a traditional baritone guitar paired with Taylor's quality craftsmanship and product innovation. The model features a longer-scaled 27-inch neck and Taylor-designed baritone bracing.

The guitar is tuned from B to B and features additional octave strings paired along with the third and fourth (D and A) strings. This feature gives players an extended range of sounds, without compromising tonal integrity or playability.

The Baritone 8-String came to be as Taylor's product development team was deep in the throes of designing several series of 35th Anniversary guitars, including a 6-string baritone (XXXV-B) and a 9-string guitar (XXXV-9).

The team decided to experiment by creating a hybrid of the two, as Bob Taylor explains. "We loved the traditional baritone, but missed having some of that upper register. We thought, what if we turned it into a 9-string baritone? So, we made one. But after deciding it was a little too jangly, we pulled off the [doubled second] string, leaving the third and fourth octave strings. It sounded awesome."

Adding the two octave strings, Taylor says, transformed the baritone. "It's a whole new ballgame. It's really, really cool because you can either accentuate those octaves or stay away from them. The beauty of this guitar is that it goes low and those two strings brighten it up, but they don't sound too 'octave-y'. It doesn't give you that 12-string effect as much as it really just extends the range because, as a baritone, the octaves aren't really high. It fills the guitar out and gives it a nice (tonal) spread."

The Baritone 8-String is tuned a fourth below standard guitar tuning, allowing the player to play songs in a lower register. In terms of the playing experience, Taylor's David Hosler, a member of the product development team, compares the tonal properties of the 8-string baritone to a blend of three different instruments.

"When I hear it, I feel like I'm hearing a 6-string, a bass, and a bit of 12-string all in one guitar," he says. "In giving it a good listen, it sounds like standard and alternate tuning at the same time."

The product development team at Taylor isn't the only group excited about the new model. Taylor-strumming dealers, from metal players to singer-songwriters, are lining up to play and share the experience with their customers. Matt Clancy, from Craig's Music in Weatherford, Texas sampled the 8-string during a fall Taylor Road Show event.

As a heavy metal musician, he was blown away with the "bigness of the tone." In fact, he says his favorite thing about the guitar is the tonal fullness he gets from a single strum. "When you're playing regular chords on the 8-string, there's so much more body, especially with octave strings," he elaborates.

"It opens up the way minor chords sound, and they sound huge on it. It's a great guitar for guys who do metal and some acoustic rock, as it's perfect for power chords, and for some jazz too, especially if they like playing in low B. It's a guitar that's filled with big, tonal goodness. It adds a depth that you can't get from any other guitar on the market right now."

Evan Carmen, a Taylor dealer from Morgan Music in Eau Claire, Wisconsin, had the chance to play an 8-string prototype during a recent visit to the Taylor factory. As an acoustic singer-songwriter, Carmen is sure this guitar will be an addition to his collection.

"There is practical application in nearly every style and genre I can think of," he says. "It's only a matter of time before it starts changing music forever. I can't wait to see how people react to it right out of the gate. No doubt, we'll be hearing it used frequently after people catch wind of what it's capable of. I can't wait to have one of my own."

As enchanting as the guitar is to play and listen to, it's equally attractive visually. The model's appointments include a mother-of-pearl peghead inlay and delicate diamond-shaped fretboard inlays, a three-ring abalone rosette, and abalone-dotted bridge pins. Premium features include Indian rosewood binding, a bone nut and saddle, and an all-gloss finish. Amplified with the Taylor Expression System pickup and strung with ELIXIR Baritone strings, the model is also offered in a standard 6-string version.

Available at authorized domestic and international Taylor dealers in mid-winter, the Baritone 8-String will be offered at a suggested retail price of $3,998 and the Baritone 6-String at $3,798. Players looking to keep their baritone guitar equipped with ELIXIR strings can purchase them through TaylorWare, the company's online store of Taylor-branded clothing, accessories and gear.

To experience the company's new guitars, artist performances, or to learn more about Taylor Guitars, please visit the Taylor Guitars booth on the second floor of the Anaheim Convention Center, Room 213.

On Thursday, January 14, at the annual National Association of Music Merchants (NAMM) trade show in Anaheim, California, Taylor Guitars co-founder Bob Taylor will be joined on stage by Serj Tankian, accomplished solo artist and creative frontman for the Grammy award-winning rock band, System of a Down.

Tankian, who garnered critical acclaim with his debut solo album, Elect the Dead, has played Taylor acoustic guitars for several years, and has spent the past two years touring with a Taylor T5.

Tankian will join Taylor to chat about guitars, his career and new projects, and to debut his latest endeavor, the Serj Tankian Signature Model T5 guitar. Following the conversation, fans in attendance will be able to ask Tankian their questions.