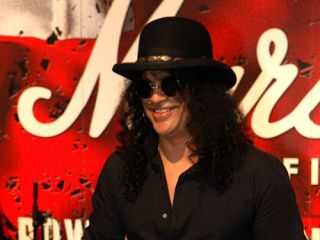 Slash at the Marshall stand at NAMM 2010

Rock guitar legend Slash appeared at the Marshall booth at the 2010 NAMM show to unveil an exciting new guitar amplifier. Dubbed the AFD100, it recreates the fabled 100-watt JCM2203 the behatted one used to record Guns N' Roses seminal 1987 debut Appetite For Destruction, an album that reenergised rock music and reinvented rock guitar in the process.

Slash told Guitarist mag editor Mick Taylor, "That amp has been subject to a lot of talk of the years. It was an amp I originally rented from SIR, and of all the amps I tried out, it just sounded amazing. So basically I stole it! Then I left it in the back of the truck one day when we were rehearsing at SIR and they kinda' took it back.

"Over the years, there have been a lot of people out there trying to replicate this amp, so we gathered all the information and put it out as the Marshall AFD100."

Paul Marshall added: "Slash is going in to the studio for his new solo album which will be available from April 6. It's such an exciting opportunity for all of us to recreate that Appetite tone, that we couldn't keep quiet about it.

"So for the very first time, fans of Slash and Marshall will be able to go online and follow the amp's development; the concept, the work by the designer, the circuit, Slash trying and testing it… right through to the launch later this year. We have a dedicated website set up at www.afd100.com. We'll be uploading progress updates, video content and more."

As soon as the amp is ready, expect to see the first review in Guitarist magazine.

Liked this? Now read this: The best electric guitars under £300, 12 best amps for heavy metal and The top 10 stompboxes we can't live without