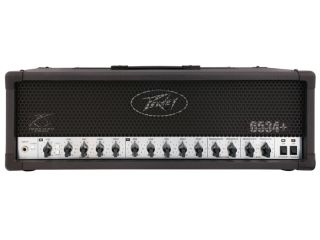 PRESS RELEASE: Peavey proudly announces the new 6534 Plus guitar amplifier, the next evolution of the high-gain 6505 Series, which has defined the sounds of aggressive guitar music since 1991.

The Peavey 6534+ Head is a two-channel, 120-watt amplifier designed with EL34 power tubes to give this American legend a British flavor. The extreme high gain and legendary tone of the 6505 Series is here in excess, but with a special new design to minimize the noise that high-gain tube amps generate.

In addition, the amp's Rhythm channel is voiced to clean up nicely while still retaining its raw saturation.

The Peavey 6505 artist roster includes Machine Head, Trivium, Bullet For My Valentine, The Devil Wears Prada, Black Tide, Evergrey, All That Remains, Story of the Year, Bleeding Through, Job For A Cowboy, Black Stone Cherry, In Flames, The Black Dahlia Murder, Daath, Divine Heresy, The Red Chord, Bury Your Dead, Demon Hunter and many more.