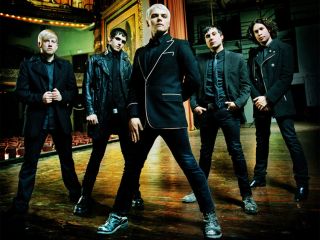 With comic books (The Umbrella Factory) and side-projects (Leathermouth) taking a back-seat, the various members of My Chemical Romance are heading back to the studio to write and record the follow-up to 2006's The Black Parade.

If you're expecting a return to previous 'emotional rock' form, however, you might be disappointed. MCR mainman Gerard Way has revealed it's going to be "less layered," "more raw" and much more mature…

"We haven't chosen a path yet," Gerard Way told BBC Radio One. "It's all over the map in terms of what's there. It's going to be less layered than Black Parade - I do expect it to be a little more raw."

"We have to make a record that reflects how we've matured"

"I'm hoping for something to happen in a very fast way, that feels very natural and that doesn't have a lot of noodling all over it. That's the goal, to get in there and have this rapid and visceral recording experience," he continued.

MCR have a huge following, and it's clear that the band are concerned about turning backs on their young fanbase…

"Black Parade was three years ago," emphasised Way. "You change a lot in three years. We have to make a record that reflects how we've matured."

"If we keep making a copy of the same record it's going to be no good for anybody. We have to change. You hope that they [the fans] come along with you but they may not and you have to take the chance."