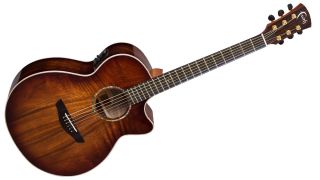 MUSIKMESSE 2016: We were given an early preview at NAMM, but we're pleased to see the official release of Faith's new Venus Blood Moon and Nomad Series travel acoustic guitars.

An OM-style electro cutaway, the Blood Moon utilises a Javanese High-Figure Trembesi tonewood for its top, back and sides, lending the guitar a similar timbre to mahogany but with a slightly more pronounced high-end response.

The design is complemented by solid flamed maple binding, ebony fittings and a Faith hardcase.

Pictured above: the Nomad Mini-Saturn

These mini versions of Faith's ever-popular Saturn and Neptune models combine solid tonewoods and a 590mm (23.2") scale length for transportable yet toneful guitars that retain full-sized string tension and tuning.

Both the Nomad Mini-Neptune and Nomad Mini-Saturn feature solid spruce tops and solid mahogany back and sides with satin finishes, while plugged-in capabilities come courtesy of a CnR3 preamp and pickup system with three-band EQ, tuner and phase button - a gigbag is also included.

The Nomad Mini-Saturn and Mini-Neptune are available now for £429 and £439 respectively.