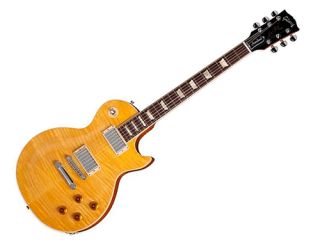 FRANKFURT MUSIKMESSE 2012: Although official information is thin on the ground - there's nothing concrete on gibson.com at the time of writing - we can confirm that Gibson has updated the Les Paul Standard for 2012.

Last updated in 2008, the 2012 Gibson Les Paul Standard now comes loaded with a pair of Burstbucker Pro Split Coil pickups. Interestingly, push-pull volume and tone controls give access not just to coil-split sounds but also, via the neck pickup's tone control, a phase switch (think Peter Green) and via the bridge tone control, a bypass function that sends the signal from the bridge Burstbucker straight to the output jack for an extra kick of aggression.

The neck has a '60s profile with a compound radius, genuine rosewood fingerboard, while the body is weight relieved.

The following pricing and finishes are rumoured, but unconfirmed: Blue Mist, Ebony, Goldtop (£1899)