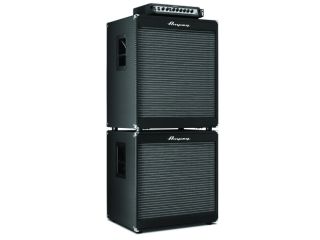 These new cabinets deliver the performance, looks and affordability of the popular Portaflex series in powerful, shelf-ported designs that offer additional low-frequency extension.

"While I don't want to say we were shocked about the immense popularity of the Portaflex heads and cabs," remarks Ampeg Product Manager, Zane Williams. "I do have to say we were pleasantly surprised by the overwhelming response from bassists worldwide. These additional Portaflex cabinets are a direct response to customer requests."

Capable of handling 400 watts, the PF-115LF does away with the compression driver, for a more vintage tone courtesy of a single 15″ Eminence® driver. The PF-410HLF delivers a much-sought-after 4x10″ configuration in a compact design that handles 800 watts. Their rugged poplar cabinet design looks great with Ampeg black diamond tolex and chrome logo, while integrated side handles and included casters are perfect for easy transportation. Just like the other Portaflex series cabinets, these new models both operate at 8 ohms, allowing the bassist to easily mix and match cabinets to get the exact speaker configuration they want.