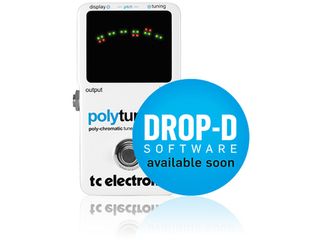 Musikmesse 2011 Press Release: PolyTune has received numerous awards and gained a huge fan base in just a little over a year, and now TC Electronic meets the single most demanded feature: support for Drop-D tuning!

TC Electronic has revolutionized guitar tuning at a stroke - or strum - with PolyTune, the world's first polyphonic guitar tuner. This cutting-edge tuning technology revolutionizes tuning and accomplishes what has been deemed 'impossible' until now: tuning all strings simultaneously!

It's as simple as: strum, tune and rock - even for hard-riffing guitarists and bassists who like to drop the lower E-string down to D! For switching between standard tuning and Drop-D, just press and hold the footswitch for two seconds.

The update also includes a new 'Capo Mode' that compensates when a capo is being used, and best of all, the update is completely free of charge to all PolyTune users!

The software update is available on TC Electronic's website, and it is simple to install via PolyTune's USB port - it's just a matter of hooking up the pedal to a computer and uploading the new software version.

PolyTune obviously has a chromatic tuner as well, rivalling the best current tuning technology out there, with an amazing +/- 0.5 cent accuracy. MonoPoly, another unique new TC Electronic technology, recognizes whether you play one or more strings and seamlessly switches between the polyphonic or the chromatic tuner on the fly.

PolyTune offers unprecedented visibility using an ambient light sensor, which automatically matches the intensity of the super bright LEDs to its surroundings. This ensures that the PolyTune display can be seen in any lighting conditions. So whatever the gig, whatever the light, whatever the situation, guitarists can now strum, tune and rock in an instant.