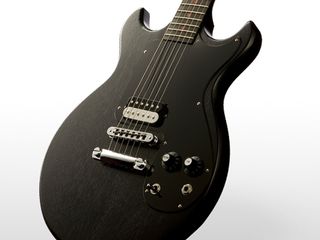 In anticipation of the forthcoming film release The Runaways and her recent release of the Joan Jett and The Blackhearts Greatest Hits album, the latest from Gibson USA embodies the hard-rockin' style of Joan Jett herself with distinct features and attention to detail.

The Blackheart Melody Maker will be available through select retailers beginning 19 March.

Jett got her own original Melody Maker back in 1977 and she has since made it one of the most iconic instruments in rock and roll. It's the same guitar she used when she was in the renowned band The Runaways and then played on all of her hits including I Love Rock n' Roll, Bad Reputation and Do You Wanna Touch Me.

The Double Cutaway Melody Maker in black features the Mini Grover LP style with a buffed neck for a smooth feel when playing some licks. Going beyond the basic look, Gibson USA adds to the style of the guitar to include features that exude Jett's personality as the neck is adorned with black heart and red dot inlays and Jett's own signature on the truss rod cover.

For sound, the A Zebra Coil BurstBucker 3 accounts for versatility. Each comes in a Joan Jett hard shell case.