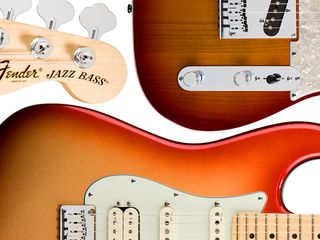 2010 sees the American Deluxe series get a makeover

FRANKFURT MUSIKMESSE 2010: Fender's all-new 2010 American Deluxe series looks set to be one of the major announcements of the show. Alongside new alder and ash American Deluxe Telecasters, four and five-string Jazz Basses and a Precision bass comes a variety of Stratocaster flavours in the shape of alder and ash-bodied, V Neck and HSS models.

The electric guitars feature reconfigured S-1 switching and compound 9.5 - 14-inch neck radiuses, while the basses benefit from a newly-designed preamp with switchable active or passive operation.

In addition to some tasty new finishes including Sunset Metallic, Tungsten and Wine Transparent, the most significant upgrade across the range comes in the shape of Fender's new N3 Noiseless pickups.

Fender says: "N3 Noiseless pickups are among the best-sounding pickups ever affixed to a Stratocaster or a Telecaster guitar, achieving the remarkable sonic feat of providing unmistakable vintage sound without unwanted noise…

"Using an improved stacked-coil design, N3 Noiseless pickups are specially tailored for each Stratocaster and Telecaster pickup position... The insulated metal core of each pickup position type differs in thickness and composition for enhanced tone, and Fender has fine-tuned the size, shape and wire gauge of the coils to balance the magnetic responsiveness essential to great tone.

The full list of models and UK pricing is as follows: