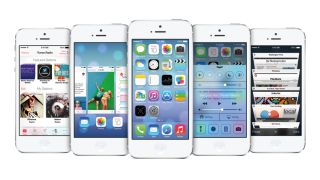 The new iPhone launched but, as far as musicians were concerned, iOS 7 didn't get off to a great start... (Image credit: Image courtesy of Apple)

Do you want to produce a banger that sounds just like everyone else's? As September rolled around, our rundown of the top 10 dance music production clichés showed you how.

As Dream Theater launched a new album, John Petrucci talked us through it, and Mark Tremonti did the same as Alter Bridge released Fortress.

Finally, a beautiful sense of freedom prevailed as we rounded-up a selection of the best free and open-source music making programs.

Here's what you were clicking on MusicRadar in September 2013...

The 25 best acoustic songs of all time
What have MusicRadar users voted the best strumalong song?

Mark Tremonti talks Alter Bridge's Fortress track-by-track
"We were pushing for unpredictability. Everything we could throw at these songs, we did."