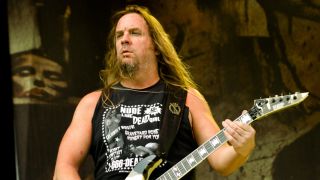 As news broke of Slayer guitarist Jeff Hanneman's death yesterday (2 May), music stars, particularly those in the hard rock and metal community, took to the Internet to express their grief and pay tribute to the pioneering thrash musician.

SLASH: Tragic & shocking news about Jeff Hanneman. He is going to missed by so many. What a sad day for Metal. RIP man.

ZAKK WYLDE: RIP brother. You will be missed.

DAVE LOMBARDO: I'm deeply saddened shocked and speechless. It's difficult for me to write my feelings at this moment. My heart goes out to #KathyHanneman.

PETE WENTZ: Rest in peace Jeff Hanneman. Decade of aggression is the first cd I ever bought with my own money. Sad day.

DAVE MUSTAINE: We send our condolences and deepest sympathies to the family, friends, and fans of Jeff Hanneman. Our hearts go out to his brothers in Slayer. Tonight one less star will be shining and sadly, the stage got just a little bit darker. Jeff Hanneman 1964-2013.

MACHINE HEAD: RIP Jeff Hanneman. One of the greatest songwriters in all of metal let alone music. Our hearts go out to his family and band mates.

NIKKI SIXX: Just heard the sad news about Jeff Hanneman of Slayer. My condolences to his family,the band and all his friends and fans..RIP

RANCID: Our heart goes out Jeff Hanneman's friends and family. You will be missed man.

GUS G.: Gutted to read the news. RIP Jeff Hanneman :( the music world has lost yet another one of the greats

IN FLAMES: We are so devasted to hear about the passing of Jeff Hanneman. One of the greatest have passed on and please,...