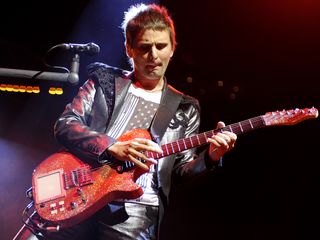 Muse are making their third appearance in a Twilight Saga film with the song Neutron Star Collision (Love Is Forever) - this despite drummer Dominic Howard's assertion to fans back in March that "for this film it's not going to happen."

Not only did it happen, but as opposed to the first two Twilight films, Muse have penned an original song for the soundtrack - and it's the first single, no less.

Neutron Star Collision (Love Is Forever) is prime, latter-day Muse. Over a sweeping piano opening, Bellamy sings dramatically, "I was searching, you were on a mission/ Then our hearts combined like a neutron star collision/ I had nothing left to lose, you took your time to choose/ Then we told each other with no trace or fear that."

Then he opens his throat and, at the same time, lets loose with Brian May-like monster guitar riffs. The rhythm gallops off, driven by Howard's floor toms while flavored with carnivalesque keyboards.

The chorus is a kitchen sink of all that is Muse, the band crashing together as one as Bellamy bellows "Love is forever/ And we'll die, we'll die together/ And lie, said never/ Cause our love, can be forever."

A stinging guitar solo follows, with the floor toms once again serving as the underpinning, and then the band bashes a second chorus for all get out. It's capped off with a short and somber coda of George Gershwiny piano over which Bellamy does his best Freddie Mercury falsetto.

Bottom line: If you're a Muse fan, you'll love it. If not, you probably won't be won over.