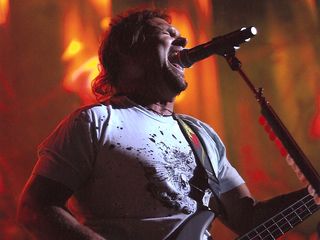 As the bass player for Van Halen, Michael Anthony held down the fort - wherever guitarist Eddie Van Halen wanted to go, Anthony was right there, guiding the ship, providing a fat yet nimble musical bed for whatever was to come.

Not as easy as it sounds. And Anthony steers a veritable ocean liner of musical talents on the upcoming Chickenfoot album, the much-anticipated debut from the ensemble that is Sammy Hagar, Joe Satriani, Chad Smith and Anthony.

"Being a bass player in these big-time rock bands is hard work," Anthony says. "A lot of practice, a lot of research, a lot of studying the right guys - it all plays a part. I don't listen to just these heavy metal monsters. When I came up, it was the era of the free-form band, but also the power trio, which called for bass players who locked in and looked for their moments to make their mark."

In this exclusive interview with MusicRadar, Michael Anthony talks about his three biggest bass influences, and explains why young players should dig in and go back in the day. "It's back to the future, for sure," he says. "But I guarantee, if you listen to these guys, you'll improve as a player."

"He's the first reason why I got into playing bass. My sister brought home the first Electric Flag record and on it was this blues song called Texas that just stopped my world cold (sings) 'Just got in from Tedas, baby/ you didn't even know I was gone.' Even as a kid I knew that was deep."

"The minute I heard that song with its walking bass line I went, 'That is so fucking cool.' I had just picked up the guitar at this point, but when I heard Harvey Brooks, I took the two top strings off the guitar and made it my bass. For five or six months that's how I played, on a guitar turned into a bass.

"Harvey was a great blues player. He had this groove that really spoke to me; it was so fluid and smooth, and he seemed to carry whatever song he was playing somewhere else, but he never lost sight of that fact that he had to stay in the pocket.

"Hearing Harvey Brooks was one of those 'bam!' moments in my life where everything made complete sense. I was hooked on the blues because of him. If younger players want to seek him out, they won't go wrong."

Probably my second biggest influence. To me, if anybody wants to pick up a bass and learn how to play with taste and musicality, he's definitely a guy to listen to.

"So much of the time people focus on the awesome power of Led Zeppelin, the whole 'Hammer of the Gods' thing, but John Paul Jones, probably because he was a session player, he put a lot of thought into his playing. He didn't just lumber through.

"To this day, I listen to The Lemon Song, and I'm blown away by that little bass thing he does in the center when they're doing that jam. It inspires me. If I'm getting burned out, if I'm feeling like I need something to bring me back to why I love playing the bass, I'll put on The Lemon Song and it renews my spirit."

"Another track of his that made a big impression on me was Bring It On Home. Jones starts a walking line on the verse that still gives me goosebumps. So much musicality. You could hear the orchestral guy he would later become.

"It was never so much the heavy metal thunder that got me. I was into players who played with taste and did these walking bass parts. If you can play like that, it really opens up the music. You can't just pound away. After a while it's like, 'So what? What else you got?'"

"This is hard. As much as I love John Entwhistle, Jack Bruce and his work with Cream really got me into the three-man concept where you didn't need a rhythm guitar player; you didn't need a keyboard player; all you needed were three guys and a singer - and maybe one of them could be the singer!

"With Cream, they had this telepathy that was unbelievable, the communication. Jack Bruce really showed me that you could go anywhere with a bass part, and as long as you stayed in time, as long as you held down the groove, the door was wide open.

"Everything off the first record, Fresh Cream, blew me away. Their version of Spoonful - it's a masterpiece. Each member was a soloist, but they responded to one another; there was nothing disjointed about it. It wasn't just people going off."

"I remember when Fresh Cream came out, I was starting to jam with other guitar players at this point, and Jack's influence really paid off. Guitar players who I was playing with realized we could do it all by ourselves - we didn't need another guitar player. That probably helped prepare me for Van Halen. A bassist has to be the bedrock, just like a drummer, but that doesn't mean you can't tell a story in your own right - you just have to know when the time is right."

"If young bass players want to learn taste, restraint, but tricky ways to be musical, they should check out these guys. They might be surprised by what they find."

In the coming weeks, look for an exclusive MusicRadar podcast with Chickenfoot, plus a special advance album preview.