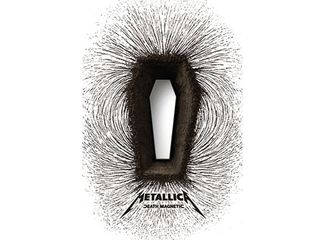 For weeks now they've been teasing us with a series of images that were purported to be the artwork for their upcoming album, Death Magnetic. Well, now they've "officially" announced that the image on your right is the finished artwork - a coffin formed by magnetic particles.

Regarding the album's title, frontman James Hetfield says, "It started out as kind of a tribute to people that have fallen in our business, like Layne Staley and a lot of the people that have died, basically - rock and roll martyrs of sorts. And then it kind of grew from there.

"Thinking about death…just like a magnet, some people are drawn towards it, and other people are afraid of it and push away. And the concept that we're all gonna die sometimes is over-talked about and then a lot of times never talked about — no one wants to bring it up; it's the big white elephant in the living room. But we all have to deal with it at some point. So that's kind of the subject matter."

Death Magnetic is due out in September. A deluxe box set edition of the album will be available in the US. The coffin box package will contain one CD featuring the album, another containing demos, a behind-the-scenes DVD, an exclusive T-shirt, a Metallica flag, a collection of guitar picks, codes for a special live download and a poster. The coffin box will only be available through Metallica.com, MetClub.com, and MissionMetallica.com.

So that's the cover, ladies and gentlemen. Or is it?