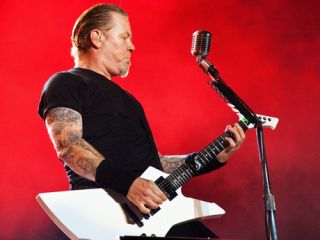 James Hetfield and co will be playing this year for as low as six bucks. That doesn't even buy a set of guitar strings! © Robert Wagenhoffer/Corbis

Metallica turn 30 this year - yes, believe it - and they're celebrating the anniversary their way: the band will play four special concerts in San Francisco at the historic Fillmore on 5, 7, 9 and 10 December.

These unique shows will include special guests and events, rare songs, varied set lists, odds and ends - basically, anything and everything to send Metallica fans into utter metal bliss.

Even better are the super-low ticket prices. According to the band's website, fans can "participate in the entire week of festivities with special four pack tickets (one ticket for each of the four shows) and automatic entry into the contests for various other special events, available for the clever price of $19.81 (get it??).

Of course, there's the catch: you have to join the Met Club before you have a shot at buying tickets. On the other hand, $45 isn't so bad if you do indeed get into one or all of these special shows (bear in mind the 'reservation system').

For more information on the week's festivities and ticketing info, click on the Metallica website. And check back with us next week... we'll be having our own salute to Metallica with a feature you won't want to miss.