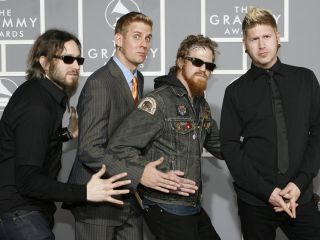 Mastodon have just issued the above video trailer for their upcoming album, The Hunter. Although the clip is brief, it's enough to give us a good idea of what the song Black Tongue sounds like - and an insight into the overall vibe of the rest of the record: major progressive psychedelia!

While it's easy to get lost in the mind-bending video images, the savage riffage of guitarists Brent Hinds and Bill Kelliher is pure audio Red Bull. It is said that Mastodon have dropped their trademark Byzantine storyline approach on The Hunter, but judging from this all-too-short sample, it's clear that their challenging, multi-layered prog-metal aesthetic remains.

As we previously reported, the band have revealed several song titles from The Hunter, including Blasteroids, Dry Bone Valley, All The Heavy Lifting, The Octopus Has No Friends, Stargasm and Curl Of The Burl. (Quite honestly, we don't know which one we like best - they all sound like a hoot.)

The album was recorded in Atlanta and Los Angeles with producer Mike Elizondo and will be released this fall.