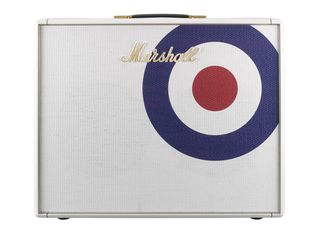 Marshall Amplification has announced details of a limited edition of just 50 1987X-PW combos based on the rare 2100 Lead and Bass 50 amplifier that Paul Weller has been plugging in to for more than a decade.

Marshall's Lead and Bass 50 amplifiers were only manufactured in small numbers between 1973-76, and Weller's 1976 model has been lovingly recreated tonally.

Aesthetically, there's the obvious addition of the classic off-white levant and baffle complete with mod target.

To commemorate Weller's 50thbirthday, with every 1987X-PW sold, Marshall will make a sizeable donation to Childline, the UK children's charity.

Priced at £999, the amplifier features: