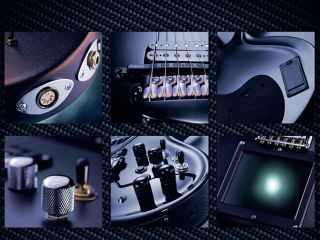 So, here we are in 2010. Frankly, we expected jetpacks and hoverboards by now. That said, the telephones in our pockets that browse the internet and house entire record collections suggest that technology is in rude health.

Nevertheless, it's easy to accuse guitarists of looking backwards. Our favourite guitar gear of 2009 was dominated by new versions of old ideas, in one instance even an artificially aged instrument scooped the honours.

What better time then for the guys at Guitarist magazine to get to grips with a couple of electric guitars that are all about the future: Hugh Manson's MB-1 Standard - Muse frontman Matt Bellamy's signature model - and the Parker Fly Mojo MIDI.

Check out the video clip to see Guitarist editor Mick Taylor put the Manson and Parker guitars through their paces; teamed with a Korg Kaoss Pad and Roland VG-99 guitar synth respectively, the possibilities are limited only by your imagination... and possibly the size of your wallet.

To read detailed reviews of the Manson MB-1 Standard and Parker Fly Mojo MIDI, along with a special feature about MIDI and guitar synths, buy Guitarist magazine issue 324, on sale now.