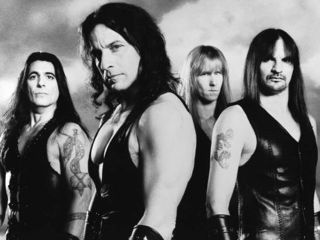 Kings of metal. They said so

What's better than a Manowar concert? A five-hour Manowar concert, of course! And if you happened to be at the Kaliakra Rock Festival 2008 in the Bulgarian "rock capital" of Kavarna on July 5, that's exactly what you got - whether you wanted it or not.

The performance - all five hours and one minute of it - was the metal band's attempt to break the world record for the longest heavy metal concert, which they themselves set in 2007 at last year's edition of the festival. That performance was just three hours (sissies). At this year's show, invited representatives of Guinness World Records were on hand to witness the event.

The self-annointed "kings of metal," Manowar (consisting of Joey DeMaio, bass; Eric Adams, vocals; Karl Logan, guitar; and Scott Columbus, drums) pleased a crowd of 20,000 hearty (and no doubt patient) fans with a playlist of more than 40 songs, many of them dealing in the traditional Manowar themes of swords-and-sorcery and fantasy themes. To fill out the set, the band played covers of Dio and Aerosmith tunes.

"Bulgaria, we devote this concert to you," Joey DeMaio told the crowd during a break between songs. Where it is written in Guinness' book of records about the longest heavy metal concert, it will be written that this was the concert of Manowar in Bulgaria."

As MusicRadar has previously reported, musicians across the globe have apparently gone world record crazy. Drummers, guitarists, Hungarian bands, even good ol' Country Joe and 2000 friends - everybody's gotten into the act. If this keeps up, MusicRadar will soon set a world record for writing about bands setting world records. And then we'll do it again. It never ends...