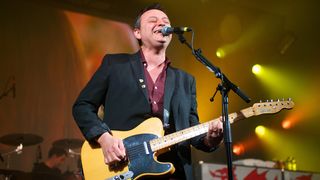 James Dean Bradfield: "We just followed our muse and went for it." (Image credit: John Graham/Demotix/Corbis)

Not many bands survive 28 years of triumph and tragedy and release a dozen studio albums that retain a sense of progress, change and invention. But Manic Street Preachers are not like "many bands".

The Welsh outfit's lauded 12th album, Futurology, arrives today only nine months after their 11th. With its non-bluesy but hard guitars, motorik rhythms and references to European art, history, travel and politics, it's a complete contrast to 2013's Rewind The Film, their "most Welsh" album.

Perhaps strangely, both LPs were recorded at the same time, as the band moved between their own Faster studio in Cardiff, Monmouthshire's Rockfield Studios, and Berlin's legendary Hansa Studios (venue for the recording of Bowie's Low and Heroes and U2's Achtung Baby.) Futurology includes guest appearances by Scritti Politti's Green Gartside on Between The Clock And The Bed, and German actress Nina Hoss on Europa Geht Durch Mich.

MusicRadar caught up with Manics singer/guitarist/main music writer James Dean Bradfield at Cardiff's Faster, and discussed the birth of Futurology...

Although recorded at the same time, Rewind The Film and Futurology couldn't be much more different. How so?

"We did the National Treasures show at the 02 back in 2011 - all the singles we'd released. After that we shut-up shop for two years. Then we started to make Rewind The Film.

"We wanted to make our own version of Bruce Springsteen's Nebraska, if you like. I remember Richey (Edwards, former MSP lyricist/guitarist) even talking about that in 1993, so it was a long-held ambition.

"Obviously, Rewind The Film itself sounds nothing like Nebraska, but the lyrics were more retrospective - a little more gentle, melancholic. But when we laid out all the tracks we'd done, some were very different. It was clear the songs didn't match. We basically had two separate albums."

So it wasn't a plan to make two albums?

"Futurology reflects the freedom of movement - the joy of travel through Europe. So they were quite different songs, and we separated them for these two albums.

"We thought, after all these years, that if we haven't got the freedom to do this now, we'll never do it. So we just followed our muse and went for it."

There's a strong "Eurorock" influence on Futurology, but also that of UK post-punk "New Pop" bands' take on that - particularly early Simple Minds, even down to the artwork?

"Definitely. Simple Minds' Reel To Real Cacophony, Empires And Dance, Sons And Fascination/Sister Feelings Call, New Gold Dream I love. I also love Sparkle In The Rain, too. Waterfront is brilliant - a song about the glory of the Glasgow docks but also the ghosts in there."

"Maybe, but early Simple Minds albums I treated like my church. Obviously there was much more - The Clash, Sex Pistols, Skids, Magazine, lots of Motown. But Simple Minds were a constant.

"I honestly think that's one of the most glorious periods of any British band ever. The improbability of these Glaswegian "soccer casuals" making that music was incredible. They were into Bowie and Mott The Hoople, whatever, but the inventiveness of those records was amazing to me.

"I could talk and talk about how every one of those musicians was incredible. Derek Forbes, one of the greatest bassists of all time. Charlie Burchill is an incredible guitar player. I spoke to him once and he said he couldn't read Simple Minds reviews because one had said 'you can hear the FX before you even the guitar come in.' Utter bullshit. The way Charlie melds with Mick MacNeil's keyboards is superb. They could stay out of each others' way for a time, yet then really complement each other. Brian McGee seemed to specialise in that Krautrock beat. Metronomic. Motorik!

"And Jim Kerr singing about Baader-Meinhof, the Red Brigade, the Constantinople Line. Pretentious to some, but they were just trying to put everything in their songs. Amazing band. I'll never get bored of those records - they had something that will never leave me. Simple Minds were crystalline gods to me."

You have a rare task as a music writer, as you're normally someone singing else's words.

"Yes, but it's changed a lot over the years. It used to be that Nick (Nicky Wire, bass) and Richey would give me and Sean (Moore, drums) the lyrics first, and we'd spend time with them, try and interpret them, and write music. And I'd often have to ask about some references, words-wise.

"But it's changed to a degree. There are 13 tracks on Futurology, and I'd say 65 to 70 per cent remain me and Sean interpreting Nick's words. But Nick wrote Divine Youth and the track Futurology in their entirety, music and lyrics. The Next Jet To Leave Moscow I wrote on my own, music and lyrics."

Any tips for writing songs like Manic Street Preachers do?

"Well, I should point out that I never have music ready. Never. I don't have a 'stock' of riffs and stuff 'lying round' waiting for lyrics. I never do that, I refuse that.

"For us, the lyrics must inspire the music, as I'm - like you say - usually singing someone else's words. We've never liked the idea of, 'I've got this bit, you've got that bit, let's just put them together.' That's just lazy. We never do that."