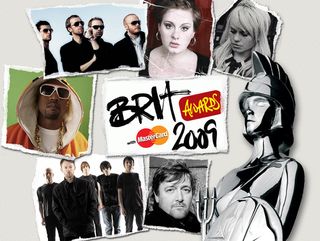 We're rooting for the Britannia statuette...

The Brit Awards 2009 ceremony is almost upon us, and MusicRadar is covering 'the music event of the year' live.

We can expect to see performances from Coldplay, Duffy, Estelle and the Ting Tings, Girls Aloud, Kings Of Leon, Take That and U2, while Pet Shop Boys will take to the stage after receiving an Outstanding Contribution To Music Award.

There are plenty of other gongs to be handed out, too - check out MusicRadar's predictions to find out who we think will win them.

The show starts at 8pm GMT, and we'll be bringing you updates both here and on Twitter. Will Coldplay sweep the board, or could Duffy or even - gulp - Scouting For Girls steal the headlines?

Check back soon to find out.

Latest updates will appear directly below. Hit Refresh/Reload to see them.

22:02 That's The Brits 2009 finished. I'm not sure how the papers are going to spin any controversy out of that - Coldplay not winning anything was probably the only big shock - but I'm sure they'll try. Thanks for reading.

21:57 After a song with a name that escapes me, we're into West End Girls. Flowers and Gaga are both on the stage now (I'll leave it to tomorrow's tabloids to describe the latter's outfit for you).

21:54 Lady Gaga is on for a brief What Have I Done To Deserve This?, and by the sound of things, she's not miming. And then it is Brandon Flowers! He is performing after all: helping out on It's A Sin and sounding pretty good.

21:50 Suburbia gets things started, and I think Neil Tennant is miming. Then it's the new single, which segues into Always On My Mind, and then Go West. They're certainly rattling off the hits. They didn't actually write the last two, but never mind.

21:47 Scratch that - it seems Flowers will just be introducing Pet Shop Boys, and he does it while wearing a jacket that makes it look like he's being attacked from behind by a headless bear (find a picture and you'll see what I mean). Pet Shop Boys' brief acceptance speech is via the big screen, and then it's into their performance.

21:44 Now we can look forward to The Pet Shop Boys and Lady Gaga... and we've just been told that Brandon Flowers will be performing, too. So The Killers aren't here, but their frontman is.

21:39 BEST BRITISH ALBUM: DUFFY, ROCKFERRY They have been snubbed - Coldplay will leave with nothing. Jones plays up the Welsh angle as he hands over the award and, at last, Duffy shows some emotion.

21:38 Tom Jones is on to present Best British Album. This is the big one. Will Coldplay be snubbed again?

21:34 BEST BRITISH SINGLE: GIRLS ALOUD, THE PROMISE A popular win, this. Girls Aloud have released some cracking singles over the years, so even if this wasn't their best, few would begrudge them their first Brit.

21:33 I haven't been reporting on Kylie's costume changes. Sorry.

21:28 It's time for The Ting Tings and Estelle. Could this be the medley I've been waiting for? Close - it's a mash-up, starting with Shut Up And Let Me Go, which morphs into American Boy. It sort of works, though it feels a little forced, as these things often do. The jump into That's Not My Name isn't so seamless - there isn't a second Estelle song, because she hasn't got one that everyone knows - but this is still the most interesting thing I've seen this evening.

21:27 BEST INTERNATIONAL MALE: KANYE WEST Another absentee, and there's nothing controversial to report from the pre-recorded speech.

21:26 Gok Wan comes out and shamelessly plugs his TV show. He's got the Best International Male statue in his manicured hand.

21:23 CRITICS' CHOICE AWARD: FLORENCE AND THE MACHINE We knew about this one already, but Florence is here to collect her award. She's taller than I thought, and better-spoken.

21:14 Kings of Leon are playing now - they've got the duration of Use Somebody to bring me round. They're a distinctly more impressive unit than U2, but they still sound like they're best suited to soundtracking a big scene in The OC to me. Weak backing vocals in the middle eight let the side down somewhat.

21:12 BEST BRITISH GROUP: ELBOW A victory for the underdog, though they did win the Mercury Prize last year. Coldplay stand up and make a big show of applauding them, just to prove that they're not bitter. Another dreary acceptance speech.

21:10 David Hasselhoff is on to present an award, much to irony-loving students' amusement, one assumes.

21:07 BEST BRITISH LIVE ACT: IRON MAIDEN I knew it - this was a fan-voted award and Iron Maiden's clearly came out in force. They're absent, and those in the hall sound decidedly underwhelmed.

21:02 Take That descend from space - is the Thunderbird puppet look that they're rocking intentional? I've yet to work out how this relates to Greatest Day, the song they're singing, but maybe it's best not to dwell on these things too much.

20:59 BEST INTERNATIONAL ALBUM: KINGS OF LEON, ONLY BY THE NIGHT Another one for The Leon, who seem less wowed this time. They thank the whole of England, which is generous, and suggest that it'll be hard for us to get rid of them. Damn.

20:50 Joe Calzaghe comes on in a shiny suit to present Best International Album.

20:52 I was wrong - she only did one song. More backstage filler next to the caravan (don't ask).

20:47 Now Duffy's singing - I sense a medley coming on. She's starting with Warwick Avenue, which is restrained and confident.

20:46 BEST BRITISH MALE: PAUL WELLER So that 'leak' earlier this week was accurate. Weller's speech is pre-recorded because he isn't in the house.

20:45 Here are Cullum and Oliver on the stage rather than behind it. The former looks like the latter's little mascot. They're dishing out Best British Male.

20:43 BEST INTERNATIONAL GROUP: KINGS OF LEON It's the brothers grim. To be fair, their recent singles have been pretty good, but I still don't really get them. They seem pleased, though, thanking the Brit Academy, their record label and various other people.

20:41 Kylie's back - I thought she'd gone home. Natalie Imbruglia (remember her?) is on to present Best International Group.

20:35 Jamies Cullum and Oliver are being interviewed backstage, for some reason. Cullum makes a lame gag about Duffy not winning Best British Male, but it's still better than anything the Horne/Corden dream team has mustered so far.

20:33 Chris Martin just made a noise like a monkey.

20:30 Coldplay are on, and Chris Martin looks typically overwrought. I do worry about him sometimes. It's Viva La Vida as you've heard it many times before, complete with Fisher Price military clothing and dodgy falsetto. The ticker tape makes it feel like a finale - the organisers really should have left themselves somewhere to go on the staging front.

20:28 BEST BRITISH BREAKTHROUGH ACT: DUFFY Another one for Duffy, and my theory about the awards being shared around goes out of the window. She's woken up a bit now, but still hasn't thought of anything interesting to say.

20:26 We're back after a break, and there's more tedious Horne/Corden banter. This is the best British comedy has to offer? A cut to the audience shows a bemused Seasick Steve.

20:20 Duffy is interviewed backstage and sounds even less bothered than she did on the podium.

20:16 Cheryl Cole takes time out from being The Nation's Sweetheart to join the rest of Girls Aloud on stage. They're shielded by pink feather fans (you know, like the ones strippers use) and they're singing The Promise. It's a little pitchy (as Simon Cowell likes to say), but then great vocals aren't really this band's forte.

20:12 BEST INTERNATIONAL FEMALE: KATY PERRY They're front-loading the show with awards so that they can concentrate on great performances later on (I hope). Tabloid favourite Perry wins, and sounds a little hoarse. Thanks her record label - what a rebel.

20:10 BEST BRITISH FEMALE: DUFFY Predictable really. Dusty Somerfield (she's sold a lot of records in supermarkets, after all) takes the prize and says literally nothing of interest on the podium.

20:06 Bono took his glasses off at the end, and appeared to be heavily made-up.

20:01 OK, we're off... though I appear to be watching a group of secondary school teachers rocking out in front of their students on the last day of term. My mistake, it's U2, and they're doing Get On Your Boots. It's a decent enough performance, but this still sounds like album filler rather than killer lead single. Does The Edge ever wash his hat, I wonder?

19:48 OK, we're almost ready for the show, and I'm as nervous as Kanye West at a gig after he's been told that his Auto-Tune rig isn't working. Feel free to add your own comments on proceedings below - it'll be all systems go in about five minutes.