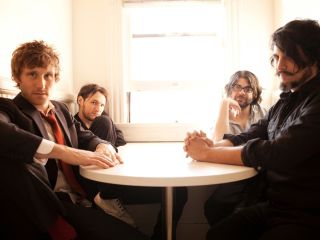 In 2008, a year before he joined the Red Hot Chili Peppers, guitarist Josh Klinghoffer formed the group Dot Hacker with Clint Walsh, Eric Gardner and Jonathan Hischke. The band released a self-titled debut EP earlier this year, and on 1 May, their first full-length album, Inhibition, will be issued.

The band's pedigree is impressive: along with the Chili Peppers, the four members have recorded or toured with Beck, Gnarls Barkley, PJ Harvey, Charlotte Gainsbourg, The Butthole Surfers and Broken Bells. Klinghoffer is Dot Hacker's songwriter, lead vocalist, guitarist - he also plays piano.

You can check out a clip of Dot Hacker performing the song Order/Disorder live (recorded at the Troubadour in Hollywood last month). In addition, you can download the studio version of the cut here, as well as Inhibition's title track here.

The album Inhibition will be available through all major digital outlets, and in stores on CD and vinyl. An exclusive run of 200 copies of limited-edition black, blue and white swirl vinyl is available for pre-order here. Follow Dot Hacker on Facebook and Twitter.