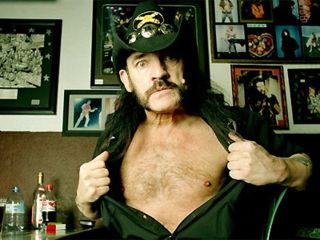 An investigation has reportedly been launched into whether Motörhead frontman Ian 'Lemmy' Kilmister committed a crime under German law by wearing what appears to be a Nazi military cap in a recently published photo.

The picture appeared in a German newspaper prior to Motörhead's 5 July, Wacken Rocks Seaside concert in Aurich, Germany, with Machine Head and Saxon.

All "anti-constitutional propaganda" - and specifically any attempt to propagate Nazism - is illegal under German law. Article 86a of the German Penal Code prohibits all "anti-constitutional" symbols, including all Nazi insignia, flags, slogans and salutes. "The decision (whether to take the matter further) lies with the public prosecutor's office," confirmed police press agent Sabine Kahmann.

Lemmy has long had an avid interest in collecting Nazi memorabilia, but in 2007 he told the Times Online his hobby was not at all suspect. "I'm not racist at all," he argued. "I just like the decorative aspect of the Nazis. I like the pageantry, the pomp. I like a parade. The bad guys always have the best uniforms."

He also once said the Nazis had "killer uniforms. I mean, the SS uniform is fucking brilliant! They were the rock stars of that time."

"Killer uniforms" might have been a bit of an unfortunate phrase, don't you think?

Meanwhile, Motörhead release a new album, Motörizer, in August and Lemmy: The Movie is in the pipeline.