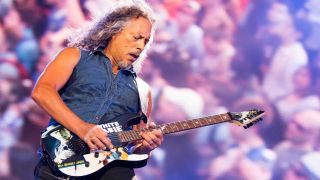 Last week, when we published our interview with Kirk Hammett and David Karon about new pedal company KHDK, the Metallica guitarist shared it on Twitter along with his quote, "I think it's the first time you'll see a pedal company actually being driven by an actual guitar player."

A host of established pedal companies - including the likes of DigiTech, Walrus Audio, EarthQuaker Devices and many more - took the words as a slight against other stompbox builders, and promptly voiced their outrage on social media. A handful of the original responses are below.

Now, Kirk has responded via Facebook, and explained that he meant no offence:

"No dis to other players who create pedals. I'm just stoked about KHDK and proud to be deeply involved in the creative process.

"I'm guilty of not reading the fine print most of the time when I'm checking out other pedals and yes, I'm more than glad that there are other guitar players out there creating new pedals and new sounds!"

That settles that, then - and it seems like builders are coming round to the apology, too:

Keep your eyes peeled to MusicRadar for more on KHDK in the not-too-distant future.