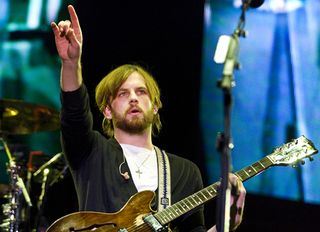 With their new album, Come Around Sundown, just weeks from release, Kings Of Leon have plenty to crow about - and some of it's due to their last record: Only By The Night, issued in 2008, which has been named the top-selling digital album in the UK.

According to official figures, the album has been downloaded 276,000 times, just ahead of Lady Gaga's The Fame with 261,000 downloads.

Martin Talbot, managing director of the Official Charts Company, predicted that while it will still take time for downloads to overtake CDs, "which still account for four of every five albums sold," he predicted that the number of legal download sites and the competitive cost of digital albums will see their popularity grow.

'With Kings Of Leon leading the way in the all-time list - Only By The Night becoming the first album to sell more than quarter of a million copies - it won't be long before we see the first half-million-selling digital album," Talbot said.

But everybody has a long way to go to upend country-pop artist Taylor Swift, who, with 28 million song downloads, is the world's biggest-selling digital artist. For the moment, at least.