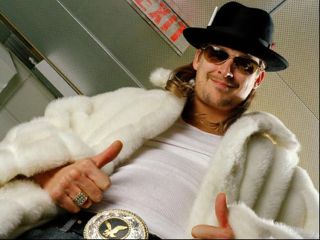 Rock has acquired - for an undisclosed sum - the naming rights to the home of the American League's Detroit Tigers. Now called Comerica Park, the ballpark will be rechristened Kid Rock Field.

And why have your own ballpark if you can't serve your own beer? Rock has already thought of that, too, teaming up with the Michigan Brewing Company to create his own line of the sudsy stuff, which will be the official beer of the Detroit Tigers.

"This has been a dream of mine for a long time," Rock said in a statement. "And with the banks in trouble it seemed like the right time for me to reach out to the fine people at Comerica Bank.

"I've never been more excited for opening day, and I'm proud to be able to add my name to the legacy of my favorite baseball team."

No word yet whether the Detroit Tigers will be sporting fur coats when they take to the field, but we wouldn't be surprised.