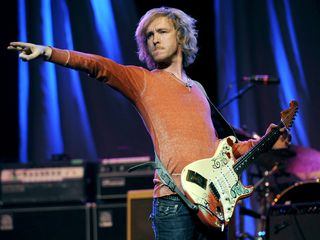 He might be striking a 'rock pose,' but Kenny Wayne Shepherd is a Robert Johnson man all the way (Image credit: Tim Mosenfelder/Corbis)

"I've been into Robert Johnson since 1990 or so, ever since the first box set of his works was released. I bought and wore out so many copies of that, it's unbelievable. To say that Robert Johnson made an impact on the music world is as big an understatement as anyone could ever make. He's the most influential blues artist ever.

"It's pretty compelling to think about how many songs that he wrote and recorded in such a short time that have become absolute staples of the blues. Hundreds of artists through the years have covered his work, so his songs have been played millions of times around the world for decades. He's probably right up there with the most-played artists of all time. The charts might not reflect that, but I guarantee you it's true.

"His songs are everywhere. You can't go to a blues festival and not hear Robert Johnson. The big jams they always have at the end, where all the guitarists get up on stage and give a crowd a rousing send-off? What do they play? Sweet Home Chicago. It's a given. And then there's Ramblin' On My Mind, Crossroads, Malted Milk, Steady Rollin' Man - his songs have been covered by so many different artists, from Eric Clapton to Muddy Waters to The Rolling Stones and Cream and Led Zeppelin, just to name a few. It's just mind-blogging to think about how different, and not for the better, music would be if it weren't for Robert Johnson.

"For a guy like me, listening to Robert Johnson is always quite humbling. When I pick up an acoustic guitar and I try to play the blues, the first guy I think of, always, is Robert Johnson. And it's not like I'm trying to copy him; I'm just inspired by him. Truthfully, I'm not capable of copying him. My thumb and my right hand just can't do what he did. When I hear him play, it sounds like two guitarists playing at the same time, and that comes through loud and clear on this new Centennial Collection."

"I've certainly been exposed to and absorbed the material through the years. Unfortunately, Robert Johnson died so young, and unlike Jimi Hendrix who had a lot of recordings in the vaults, there isn't any new stuff that's been unearthed. But what did hit me right off was the quality of the recordings, which is just fantastic. The mastering job they did is absolutely beautiful.

"Compared to the original box set that was released in 1990, the clarity on this new collection is not to believed. The improvement is one of leaps and bounds. You can't even hear any of the old album scratches; it's like they're brand-new recordings almost. The richness, raw emotion and pain that was in Johnson's voice and the sound of his guitar playing - it's all right there. Such a spooky vibe. Sonically, it's a wonder.

"I think this set will turn on a whole bunch of new listeners. The licks come through in a way that will turn heads. Put it this way: If you didn't 'get' Robert Johnson before, you will now. This puts Robert Johnson right in the room with you.

"The DVD documentary [The Life & Music Of Robert Johnson: Can't You Hear The Wind Howl?] from 1997 is very cool. I've seen it before, but I think it's great that it's included here. Using Keb' Mo, who's a fantastic artist in his own right, to play Robert Johnson was an inspired bit of casting. It puts a real visual perspective to the artist's life and times, and it gives you an idea of what it must have been like to have walked in his shoes.

"For purists, I'd absolutely recommend the new box set. But I would whole-heartedly say to all the young players out there who think they want to study the blues, this is definitely a collection to check out.

"Everything comes from somewhere, of course. A lot of young guys might be getting into the blues because of Stevie Ray Vaughan, or maybe they're influenced by me or Joe Bonamassa or Jonny Lang. But we got our start from the man himself, Robert Johnson, whether directly or indirectly. If you have your heroes, find out who they studied. Go back, go back…and before you know it, you'll be at Robert Johnson. Some guys are imitators, others are creators. With Robert Johnson, he was a creator."